A DOG’S JOURNEY THROUGH HTMA

Hey there, I am Lisa Pitel-Killah, TC is my Chihuahua and was born January 26, 1999.  My husband Troy and I brought him home at the young age of 8 weeks; he was always an energetic pup and loved his walks, and as you can see…..the sunshine!!  But a little over a year ago, he started to suffer from bloody diarrhea, so severe that we ended up at the Vet every 3-4 weeks for more antibiotics, fluid injections and probiotics.  This went on for quite some time, my poor little man was becoming more and more lethargic, wasn’t eating great and was starting to have bouts of diarrhea during the night, it was not a great time for him.  When he turned 11, on top of the digestive issues we were dealing with, he seemed to be having issues when he was walking with us because he just wouldn’t listen.  So I took him in for a hearing test and you guessed it; he was starting to experience hearing loss; I cried all the way home from the Vet.  It was very upsetting facing the fact that he was getting older and may have to eventually live out his senior years not being able to hear us. For those of you that know me, you know that I never back down from a challenge, and once I got done my brief grieving, I decided to take matters into my own hands and use the testing that I have used on myself and hundreds of clients for years to help erase debilitating symptoms and gain back health.  It is a path with little research but I was determined to trudge a new path and help my boy.  So I gave him a small hair cut, sent off his sample to the lab and waited. While we anxiously awaited his test results I decided to contact the creator of our 10+ Probiotic, Niels, and chat with him about using this invigorating tonic for TC.  To my pleasant surprise it was an astounding, yes; he actually told me they were in the midst of thinking about launching a pet line; music to my ears, I had to try it.  So for 6 weeks, every single morning I gave TC 1 tsp of my probiotic.  I administered via syringe straight into his mouth (he actually likes the flavour) to make sure that every drop got into his system.  Slowly, I could see he was drinking more water, eating a bit more and even had a little bit more energy……..but the biggest win – NOT ONE BOUT OF DIARRHEA in 5.5 weeks!!!!  That was a breakthrough and I was ecstatic

First Round of HTMA Results

Well, results came in!!!   Look at those toxicities (see Fig. 1)!  Toxic elements are detrimental to the system, cause premature aging (think hearing loss) and can wreak havoc on the entire body.  One of the main things with toxicities to ensure that if they are to be mobilized that the body’s functionality is top notch to support the detox.  You can see here that his minerals are out of balance (See Fig. 2) and when we look at the ratios (see Fig. 3) they are all quite low; oversimplified meaning is that he is in a very depleted state and needs lots of support.
In this toxic elements chart, you can see TC has elevated uranium, arsenic, mercury, cadmium and aluminum!  Toxicities can come from environmental factors, as well as other sources. 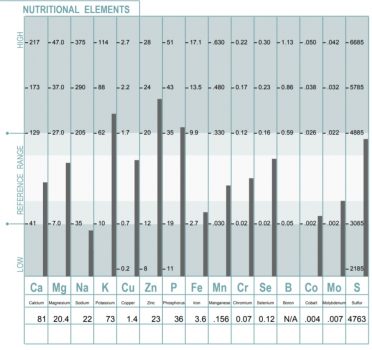 Very depleted mineral ratios, his little body is struggling with a bit of an overactive thyroid, please Fe/Cu represents infections.  This is dysfunctional and representative of the GI distress symptoms. 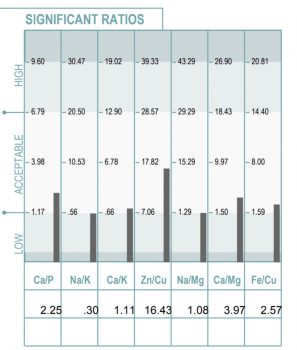 Next up, we received the test results fairly quick but I didn’t make a formulation right away.  I wanted to take the time to strengthen his gut microbiome first to have a better foundation for the detox that would ensue.  So after 6 weeks of probiotic I formulated a custom powder based on his biochemistry from the results in his testing.  One of the first things that was implemented was unrefined sea salt on TC’s dinner to help support the adrenals (Na/Mg) and also his energy levels.  His thyroid (Ca/K) is a bit overactive and may be this way due to the fact it is attempting to make up for the sluggish adrenals.  Anytime a formulation is being constructed it is not only important to look at the actual mineral levels, but analyze the interrelationships and mineral patterns.  The “Big 4” minerals (Calcium, Magnesium, Sodium, Potassium) are the heavy hitters and need to be in balance, or a negative cascade of events may ensue.  The canine formulation started with organic kelp powder, extremely supportive and nutritious for dogs, then specific vitamins, minerals and amino acids.

I started giving TC his powder in June 2020, slowly titrating up to a full dose (which for a 6 pound dog is not a lot).  He had a little loose stool at first, which can be normal when starting a new supplement, as the body may go through some Herxing (detox) reactions.  So, I reduced his dose just a bit and kept going.  It subsided and everything went back to normal in a day or two.  I am happy to say that after about 2-3 weeks on his powder (and still on his daily probiotic regime), my husband and I started to notice a change in him.  He wanted to go for walks, whereas before, he wasn’t all that interested, he definitely wanted to play more and had more energy.  It was interesting to hear from some close friends that when they saw him they described him as “more affectionate” and “more interactive” with them.  I equate that to feeling better and hence wanting to be around people.  Think about when you’re not feeling well, the last thing you want to do is entertain, right??!!  These results were really encouraging and still no diarrhea, we had a WIN!!!!!

So after a few months with these results being consistent, TC was a changed dog.  Troy and I actually both felt that his hearing had improved as well, we didn’t seem to have the same issues with him as we were having previously, which was incredible.  So given all of these positive changes, it was time for a re-test.  The follow-up test for HTMA is one of the most important, because this puts on paper what we believe we are seeing and backs up our thoughts with actual scientific data.  So another haircut and off to the lab.  The results were staggering!!

In this toxic elements chart, you can see TC has dumped uranium and cadmium.  His aluminum has started to decrease and he is actively dumping arsenic and mercury.  This is great and means his body is eliminating the built up of the toxic elements that were in his tissues.

You can see here that TC’s sodium is rising, hence his increased energy.  His body is working really hard to rid itself of the toxic metals; so the support of his custom supplement is crucial for his functionality.  Potassium, copper, zinc and phosphorus are all starting to come into more balance as well.

Still looking at depleted ratios, however, he is making some big changes when it comes to his stress ratio (Na/K) going from 0.30 up to 1.11, as well as his adrenal function (Na/Mg) moving from 1.08 to 4.37.  These changes are significant and can be correlated with his new found energy levels.

Using HTMA and our Liquid 10+ Probiotic have been a game changer for TC, they literally changed the life of my dog.  I guess the only sad part for me is I didn’t use this testing on him much earlier.  TC now wants to go on multiple walks, he is so energetic, he seems to hear fine (I will take him for another hearing test to confirm), he has a better appetite, solid poops daily and acts like a pup.  It warms my heart, because I want him to live the longest, happiest life possible.

If you want to know more about HTMA for your canine CLICK HERE.  Vykon Canine is committed to helping your dog live and perform better.

This article was written by Vykon Canine Founder, Lisa Pitel-Killah, follow her @lisapitelkillah or visit her website for more resources lisapitelkillah.com. 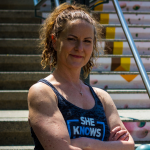 Vykon Inc. was founded by Lisa Pitel-Killah, Hair Mineral Analysis Expert, Functional Diagnostic Practitioner and multi-time Kettlebell Sport World Champion.  Vykon Performance and Custom supplements are proud to be all natural, with absolutely nothing artificial. Lisa and the Vykon team are committed to being innovative, forward thinking and believe that everyone deserves to be limitless, naturally!